This display ended on 2 February 2020. For details of our current exhibitions, take a look at our what’s on page.

We celebrated the tenth anniversary of Bradford’s UNESCO City of Film status with this display of photographs.

Bradford City of Film has forged local, national and international partnerships to develop more opportunities for people to enjoy film and celebrate the city’s diversity through film. This year’s tenth anniversary celebrations have shone a spotlight on past achievements and focused on important areas for change.

Find out more at the Bradford City of Film website. 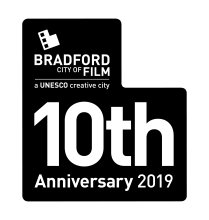