Game Talks kicks off with a packed schedule of talks and presentations from speakers representing studios including Ubisoft, Those Eyes, Acid Nerve, XR Games and Supermassive Games.

The role of UX in gaming

David has a passion for creating rich and meaningful experiences with over 20 years of experience in the field of UX and UI across the gaming, automotive and creative industries. Prior to working at Ubisoft David held leadership positions at Codemasters and Jaguar Land Rover.

Dr James Cook will be joined by Adam J. Sporka and Jan Valta, creators of the award-winning soundtrack to Warhorse Studios’ Kingdom Come: Deliverance, for a talk on open-world game music and creating a composition from scratch. This talk will consider how important it is for creators to balance working with developers and creating music to fit locations, gameplay mechanics and narrative while also adding value through original and appropriate musical material.

Adam and Jan will reveal how—starting with a systematic, high-level description of the game world, its story and game mechanics—they must ensure that the music will serve and address ‘the game’ as established by the designers, developers and engine. From there, the music must serve its creative purpose: that of intensifying emotions, elevating moments of the narrative and expressing the thoughts and feelings of characters.

Hush-hush! How to design ‘authentic’ games

Agent T will reveal secret knowledge and give bad advice on how to develop an extraordinary personal and yet playful docu-game like the award-winning Cosmic Top Secret. How to explore mechanics together with real feelings—and break new grounds for game storytelling.

Agent T, aka Trine Laier, is (maybe) a daughter of Danish Cold War spies. She also runs the game and film production company Those Eyes, based in Copenhagen. Those Eyes develops original and significant experiences where storytelling and mechanics are developed symbiotically.

Death’s Door: Making a big game with a small team

Acid Nerve Co-Director David Fenn will take us through the development journey of Death’s Door—from prototype to finished game—focusing on how the studio made everything work with a small team. Using lessons learned from Death’s Door’s development, this talk will cover general tips and advice for assembling the right team without over-expanding, staying on schedule, and delivering a polished final product.

How to raise investment funding for your games studio

If you need to raise capital for your games studio, where do you start? Bobby Thandi from XR Games reveals the dos and don’ts of raising investment, including what you need to get ready before investment; what to expect during the process; red and green flags regarding potential investors; the questions you need investors to answer—and the questions investors will be asking you.

Bobby Thandi is the founder and CEO of XR Games, an award-winning game development studio based in the UK. Founded in 2017, XR Games specialises in full-scale immersive AR/VR games, and is led by industry veterans from Rockstar, Activision Blizzard, EA, Codemasters, Sumo, Team17 and others.

This talk will explore the design process behind crafting interactive horror games in The Dark Pictures Anthology. We’ll discuss the pillars of the Dark Pictures games and delve into techniques for cinematic plotting, fear, and managing single and multiplayer branching storylines.

Make the most of your lunch break

For each day of Game Talks, there’s a scheduled break for you to grab some refreshments, take a breather and reflect on all the cool and interesting things you’ve just heard—but there’s also lots going on around the museum for you to enjoy.

Make sure you eat and get some fresh air, but also have fun, be inspired and meet lots of like-minded people!

In our permanent games gallery, you can play your way through classic games, from Pac-Man to Super Mario Kart, while you learn about the history of videogaming.

Free, bookable slots have been reserved for Game Talks passholders over the lunch break. Booking details will be added to this page soon.

Be one of the first to explore our new exhibition about the fascinating world of codebreaking, ciphers and secret communications.

Free, bookable slots have been reserved for Game Talks passholders over the lunch break. Booking details will be added to this page soon.

More information for Top Secret: From Ciphers to Cyber Security

Of course, your lunch break is for lunch! Head to the Café for hot and cold drinks, amazing cakes, and sandwiches and salads. Pictureville Bar serves great coffee and snacks for a quick pick-me-up. If you want to explore further afield, Bradford has some excellent cafés and restaurants too.

Passes for Game Talks are available as Thursday and Friday Day Passes. Each day will offer different speakers and events so we encourage you to come on both days! Read more about the Game Talks Friday programme.

The second day of Game Talks features speakers from the likes of Rocksteady, Team17 and nDreams, plus our Careers Lounge and a special Nintendo Life evening event.

Alex and Jon from the popular YouTube channel bring you an evening of all things Nintendo! 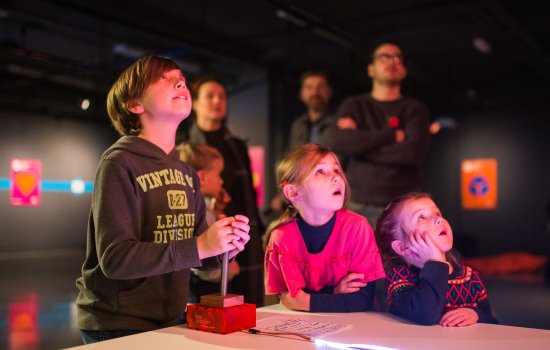 Yorkshire Games Festival takes over the museum for a weekend of gameplay, free activities and live shows for all the family to enjoy together.